On Thursday we did some awesome dance moves with Hannah and Trudi.  They came from Auckland.  We played this game called 'What are you doing?' Everyone was in a circle and then on person was in the middle acting something out.  Then another person would say 'What are you doing?'  Then the person would say something like 'riding my bike.'  The person who asked that question would have to go into the middle and ride their bike.

We played a walking around statue kind of game.  It got trickier and trickier.  When Trudi said 'go,' we had to freeze and when she said 'freeze,' we had to go!  We had lots of fun! 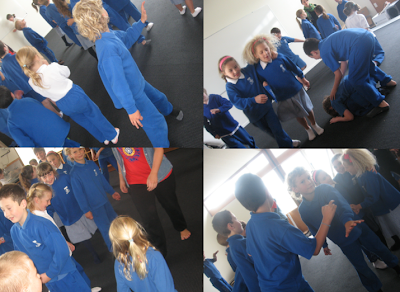