My fuppet's name is Wacko. Her hair is as soft as wool and as yellow as a banana. She has a fluffy blue nose, her skin is as soft as silk. Wacko’s tongue is as green as a leaf. Wacko is very creative, she loves to draw. She is honest and very friendly.

Wacko’s cheerful unless around Rudolph the Orange Nosed fuppet. Wacko is very kind, she likes doing things for others. Wacko lives on 129 Doughnut Drive in Fupland. Wacko’s best friends are Sparko, Sky Monkey and her worst enemy is Rudolf the Orange Nosed fuppet. Wacko’s orange cat Ginger is very fluffy. Wacko's favourite things to do are collecting things and drawing. 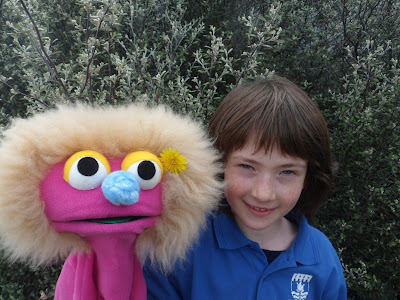