Ninja wears a velvety black costume and a slightly ripped, black mask with an eye opening.  His face is forced down because of his mask. Ninja wears an X-strap to hold his samurai swords.  This looks like it belongs in a saber tooth tiger skull. His eyes are black and his body is very cat like which completes his  reputation, he's very mysterious.

Ninja is very stealthy and is rarely seen in the dark. Everyone knows that whenever there's trouble, he turns up, saves the scene, the leaves, but that's all the know. No one knows who he really is, where he scouts, or even who he knows. There are so many long legends about Ninja that you couldn't fit them all in microscopic writing on an A1 piece of paper.

Ninja's mask is ripped because of his (natural or implanted, again no one knows), jagged, horns.
Ninja also has a pet dinosaur. According to scientists, its a Deinonychus, they are also very confused.
Why?  Well, it's a dinosaur for god's sake. 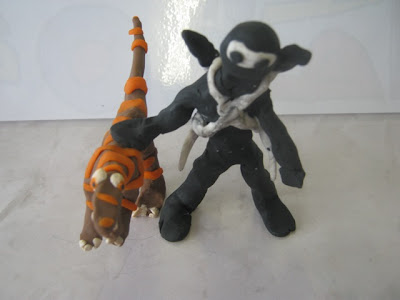